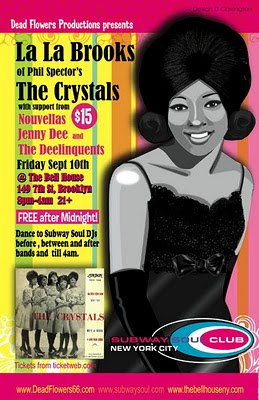 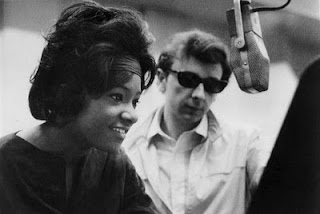 LA LA BROOKS of The Crystals
with JENNY DEE & THE DEELINQUENTS
NOUVELLAS and SUBWAY SOUL CLUB DJs
Brooklyn-born La La Brooks was the youngest member of The Crystals, just 15, when she sang lead vocal on the 'Wall Of Sound' classics "Da Doo Ron Ron" and "Then He Kissed Me" at Gold Star studios in LA for producer Phil Spector. ("A cloudburst of handclaps, Don Randi's driving piano triplets and honking saxes, Hal Blaine's drum fills rattling like gunfire, "Da Doo Ron Ron" is probably the most irrepressibly exhilarating song that Spector ever recorded. LaLa Brooks's vocal a gust of sheer, heart-lifting lovestruck joy." - Tearing Down the Wall of Sound: The Rise and Fall of Phil Spector.)
In 1968, La La appeared in the original Broadway production of the musical Hair, where she performed the song "Aquarius." She also toured with and recorded for various artists (such as the Neville Brothers, Bobby Womack and Isaac Hayes), made short appearances in films, and contributed songs to various soundtracks, including the 1970 classic, Cotton Comes To Harlem. Currently, La La is backed by Boston's Jenny Dee & The Deelinquents.
Friday, September 10th
Doors at 8PM. $15 cover.
(Advance tix available now!)
The Bell House
149 Seventh Street
Brooklyn, U.S.A.
Posted by Dead Flowers Productions