Who Is Behind The Scenes? 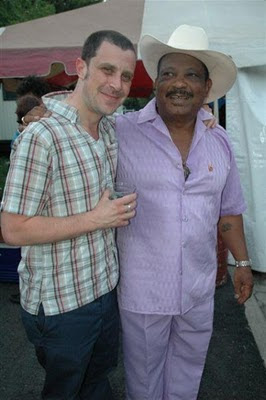 Lee Greenfeld (aka Mr. Lee) founder of Dead Flowers Productions, was born in the sightline of the East River and within spitting distance of the Brooklyn-Queens Expressway. His curiosity about the sights, sites, and sounds of Brooklyn got its hooks in early and never loosed its grip; for all of his life lived so far, he has been a proud resident of the County Of Kings. Some small part of his youth was spent obsessively scrawling curious markings on trains, walls, overpasses, and other public spots, but it wasnt long before his energies found a new focus in the world of music. There was time put in at innumerable city club shows, and endless hours spent listening and absorbing records of every variety: Punk and soul. Reggae, rap and Americana. Folk, psych, and bebop. And on and on. Subsequently, that energy was refocused into close to ten years of publication of the music journal Sound Views, dedicated to exposing the best and brightest artists of every genre and medium within the environs of New York City. He refocused again, putting out a number of albums on the Sound Views label (and its offshoot, the Do A Runner! label). Following the retirement of the magazine/label, Lee served as the de facto educator of the city's punk-oriented youth, acting as buyer for the Soapbox record store, formerly on St. Mark's Place. He then became the co-owner of the inestimable Magnetic Field on Atlantic Avenue in Brooklyn, dividing his attentions between the pouring of drinks and the booking of dozens upon dozens upon several dozens more bands and acts to entertain and edify patrons both loyal and new.

Currently, Lee is putting his energies into Dead Flowers — originally a highly regarded webzine — working with bands, artists, and projects that have stoked or otherwise touched his ever-smoldering inner enthusiasms. (Under the alias Mr. Lee, he is also a well-respected DJ, making appearances throughout NYC, as well as hosting his own long-running monthly Modern Needs party.)