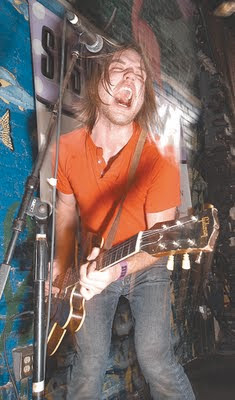 THE SIGHTS
Plus: THE INSOMNIACS and THE ELECTRIC MESS
With 2010's Most Of What Follows Is True, Detroit's The Sights have achieved an unprecedented level of song and studio craftsmanship. In an era of soulless keyboards, drum machines and Autotune, The Sights respond with thrillingly catchy songs. No gimmicks, no studio trickery—just rock'n'roll from the heart. The Sights combine the unobtrusive honesty of The Band with countless slivers of influence from their own personal record collections: Ike & Tina, Solomon Burke, The Everly Brothers, Bob Seger, Tim Hardin, and all manner of raucous, infectious song-writing.
Raucous? Infectious? That pretty well sums up The Sight’s live shows as well. It’s a rocket-ride that has been experienced by countless audiences throughout North America and Europe. The Sights have shared the stage with some best in the business: Robert Plant, The Dirtbombs, Sloan, The Datsuns, The Donnas, The Kills, etc.
•••
NJ’s The Insomniacs released their first 45 in 1991 on the Umbrella label. Over the course of the last 20 years, they’ve released a slew of acclaimed power garage pop records, mostly on the legendary Estrus Records label. During that time, the band has done several tours of the USA, festivals and tours in Germany, Holland, Spain, Norway and Sweden. Highlights include shows with The Swingin' Neckbreakers, Fleshtones, Woggles, Troggs, Makers, Nomads, Lord High Fixers, Lyres, Mighty Caesars, Headcoats, Stems, DM3 and The Remains. The band is a regular fixture on Little Steven's Underground Garage radio program and had a featured Coolest Song In The World several times over the years. Their most recent long-player, Just Enjoy It! was released in the beginning of 2011 on Blood Red and Screaming Apple.
•••
Since forming in the Summer of 2007, The Electric Mess has developed into a tight and exciting live rock'n'roll band, led by an androgynous and dynamic lead singer. Featuring reverb-drenched guitars, fuzz bass, and Farfisa organ, they combine British Invasion, '60s garage-punk, futuristic surf-rock, psychedelic pop, and early R&B stylings. Since releasing their debut album in December of 2009, all 13 of their tracks have received multiple spins across national and international airwaves.
•••
Friday, June 24th at Union Hall
702 Union Street, Brooklyn, U.S.A.
Doors at 8PM. $8 cover.
(Tickets available via TicketWeb)
Posted by Dead Flowers Productions