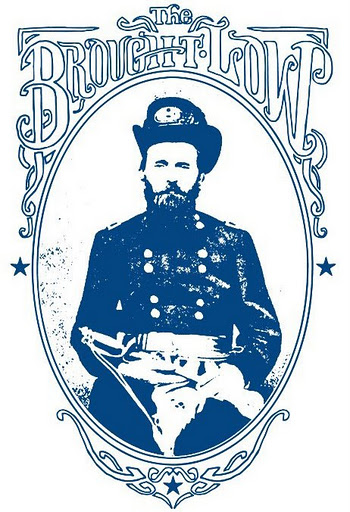 THE BROUGHT LOW
with THE LIVE ONES and THE PIONEERS OF SEDUCTION
Outer borough champions of high-energy boogie rock, The Brought Low recently released their third full-length album, the aptly titled Third Record, to near-universal acclaim. Heavy music blog The Obelisk called them "the best rock and roll band in New York" and The Big Takeover said "Previous albums have been excellent, but Third Record takes the group to a whole 'nother level, indisputably placing The Brought Low in the ranks of the Great American Bands."

Rama Lama Fa Fa Fa punk rock'n'rollers The Live Ones have been thrilling Brooklynites for years and making them get up and get down with their raucous sound. Their debut album, Yer Quite Welcome, came out this year on Drug Front Records and of it The Big Takeover said "As a hard rocking power trio led by drummer Mike Czekaj, LO blast through 12 songs that are part Rolling Stones rock’n’roll, part Dictators sound and fury, part fun-loving hair metal, and all sweat and energy, the kind that comes from guys who live to play like their lives depend on it."

The Pioneers Of Seduction combine the best elements of downtown NYC rock and recorded their first album with famed indie-rock producer Steve Albini. The Deli Magazine said of the, "The Pioneers of Seduction sure have a sense of humor — but also some (truly) kick ass punky tunes played with flair (which is as important as the kick ass part...)."

Modern Needs: Pissing On The Mainframe! 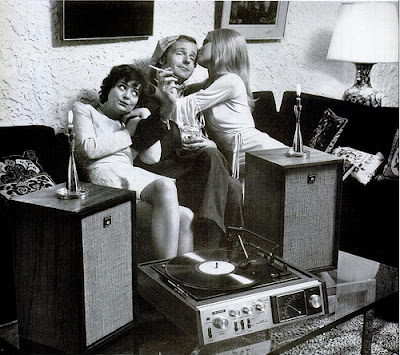 Memories Are Made Of This! 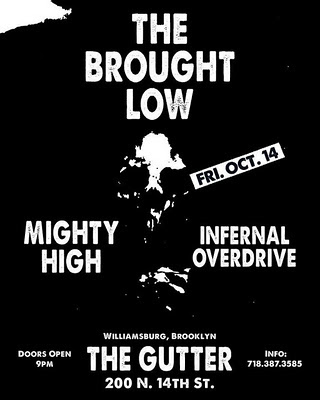 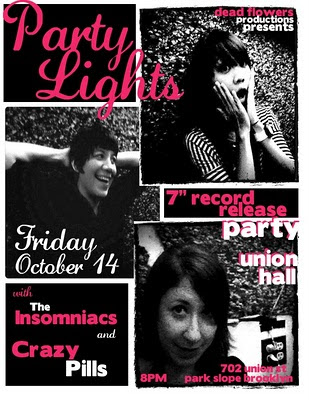 PARTY LIGHTS
with THE INSOMIACS and CRAZY PILLS
In an underground laboratory deep beneath the unsuspecting metropolis, a group of rogue scientists had been working together to create…A MONSTER! (A rock’n’roll monster, that is.)

In their secret Brooklyn lair, the three ladies of Party Lights had been working day and night to meld all of the greatest qualities of rock’n’roll into one unstoppable sound. ’60s garage swagger, mod pop cool, and fuzzed-out Go-Go’s hooks are all in the mix — and this Frankenstein looks pretty damn good in fishnets and hot pants.


•••
NJ’s The Insomniacs released their first 45 in 1991 on the Umbrella label. Over the course of the last 20 years, they’ve released a slew of acclaimed power garage pop records, mostly on the legendary Estrus Records label. During that time, the band has done several tours of the USA, festivals and tours in Germany, Holland, Spain, Norway and Sweden. Highlights include shows with The Swingin' Neckbreakers, Fleshtones, Woggles, Troggs, Makers, Nomads, Lord High Fixers, Lyres, Mighty Caesars, Headcoats, Stems, DM3 and The Remains. The band is a regular fixture on Little Steven's Underground Garage radio program and had a featured Coolest Song In The World several times over the years. Their most recent long-player, Just Enjoy It! was released in the beginning of 2011.


•••
Equal parts garage, punk and soul, NYC trio Crazy Pills channel the ghosts of rock and roll past, present and future to make you nostalgic for something you’ve never heard before. Brought together through a love of cats, tacos, The Kinks, the Replacements and The Cramps, guitarist Kitten, bassist Cherry and drummer Buzzy get the girls on their feet and bring the boys to their knees at a stage near you. Look out for the debut album in late 2011.