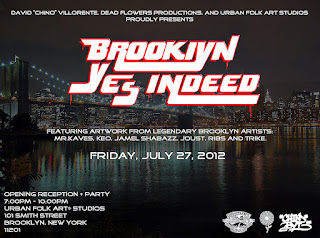 "Style is knowing who you are, what you
want to say, and not giving a damn." -Gore Vidal

Brooklynites have a pride that is unmatched, and while the borough has gone through many changes as of late, one thing holds true, Brooklynites from the '70s and '80s have style, and we know it. This style was exhibited in many ways, from the way we dressed, walked (with a knowing swagger), talked (despite mythology, there's more than just one Brooklyn accent), made a stoop our own, or how we wrote on subway trains, walls, and later, canvasses.

While street-art is often referred to as a worldwide movement — and it truly has has become one, co-opted by small commercial interests and big business alike — the art-form got its humble, ink-stained start in the five boroughs of NYC, kicked-off by city-kids for city-kids. The County Of Kings can lay claim to breeding and nurturing many a talented and acclaimed urban artist, hailing from places as diverse as Red Hook, Coney Island, Park Slope, and Bedford Stuyvesant.

The BROOKLYN YES INDEED show intends to highlight an art movement and subculture that has grown leaps and bounds from its insular D.I.Y. origins, by showcasing artwork that shows the trajectory of a clutch of legendary Brooklyn artists who have taken their work from the trains and walls of our great city onto the next level. In addition to canvas and sculpture work, the exhibit includes photography in an effort to give a context as to where the art was birthed, and by whom.