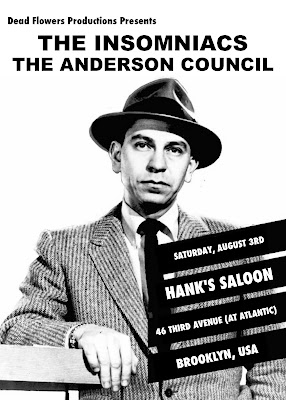 THE INSOMNIACS
with THE ANDERSON COUNCIL

Over the course of the last 20 years, The Insomniacs released a slew of acclaimed power garage pop records, mostly on the legendary Estrus Records label. During that time, the band has done several tours of the USA, festivals and tours in Germany, Holland, Spain, Norway and Sweden. Highlights include shows with The Swingin' Neckbreakers, Fleshtones, Woggles, Troggs, Makers, Nomads, Lord High Fixers, Lyres, Mighty Caesars, Headcoats, Stems, DM3 and The Remains. The band is a regular fixture on Little Steven's Underground Garage radio program and had a featured Coolest Song In The World several times over the years.