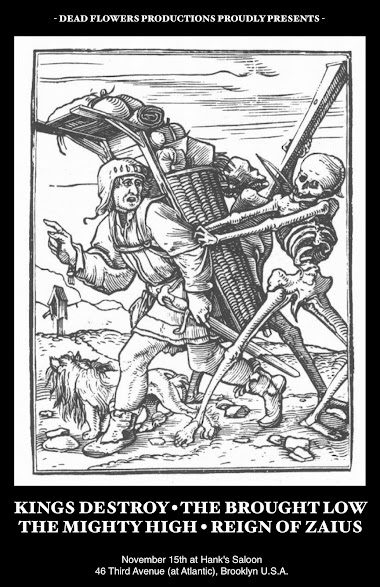 Hailing from the Brooklyn, Kings Destroy features guitarists Carl Porcaro and Chris Skowronski from NYHC legends Killing Time, vocalist Steve Murphy from Uppercut, drummer Rob Sefcik formerly of Man's Ruin, The Begotten, Uppercut and Electric Frankenstein, and bassist Aaron Bumpus. The common bond? "An addiction to excessive volume, power and driving, distorted riffs." With influences ranging from Zeppelin and the Who to The Melvins, Yob and The Cro-Mags, KD describes their sound as "brutal Sabbath heaviness with hardcore outbursts and disturbed vocals verging on the demented."

Hard-rocking, outer-borough power-trio The Brought Low recently released their third full-length album, the aptly titled Third Record, to near-universal acclaim. The Obelisk called them "the best rock and roll band in New York" and The Big Takeover said "Previous albums have been excellent, but Third Record takes the group to a whole 'nother level, indisputably placing The Brought Low in the ranks of the Great American Bands."

The Mighty High are Brooklyn's #1 regressive-rock act... No ballads. No keyboards. NO ACOUSTIC GUITARS!