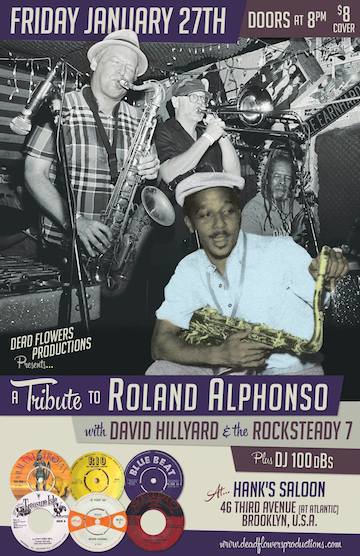 THE ROCKSTEADY 7
Play the Roland Alphonso songbook
Plus: DJ 100dBs on the wheels of steel

Saxophonist Roland Alphonso was one of the major figures of early ska and reggae on several fronts: his recordings as a soloist and bandleader, his work as a member of the Skatalites, his prolific log of session appearances on 1960s Jamaican recordings, and his role as arranger for Studio One. (The Skatalites backed everyone from Jimmy Cliff, Ken Boothe and Toots and the Maytals, to Lee Perry, Marcia Griffiths and Bob Marley and the Wailers.) Although his roots were in the jazz he played as a teenager and young man, he adapted to the emerging Jamaican popular music so well that he became one of its defining innovators. Certainly he was one of reggae's most accomplished instrumentalists — Alphonso's tone was in a league with American jazzmen and R&B players. His versatility allowed for a wide scope of recorded material, from up-tempo ska novelties and ballads that showed his skill at jazz improvisation to numbers with an R&B/soul base. Alphonso died in 1998 when a blood vessel burst in his neck just after he had completed a solo while playing live with the reformed Skatalites.