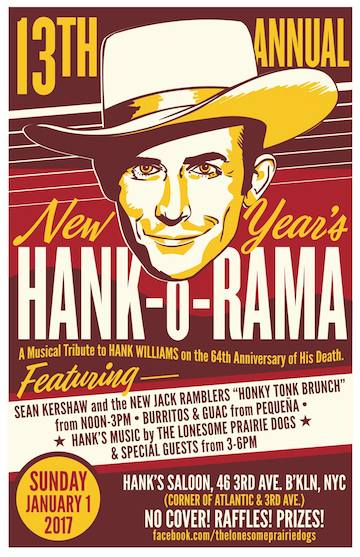 Hank-O-Rama is coming to Hank's Saloon — celebrate Hank on the 64th anniversary of his death with all yer fave country/rockabilly artists from the NYC/NJ country scene! Sean Kershaw & The New Jack Ramblers start things off with their Honky Tonk Brunch from 12:00-3:00, and then The Lonesome Prairie Dogs and special guests take the stage until 6pm.

The Hank-O-Rama party — New York’s longest-running Hank Williams tribute  —was conceived by The LPD’s Heidi and Luke Lonesome as a tribute to Hank on the anniversary of his death, and has been held every New Year's Day since 2005. Hank was just 29 years old when he was found dead in the back of his Cadillac on the morning of January 1st, 1953, en route to what was to be a New Year’s Day gig in Canton, Ohio. The party is a symbolic raincheck for that show.