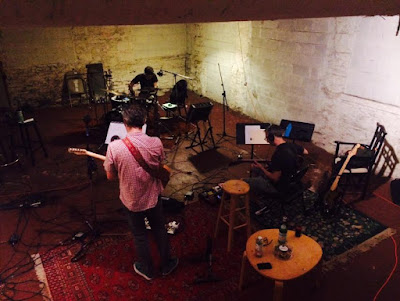 Founded in Athens, Georgia in 1996, Great Lakes are a psychedelic-tinged indie pop/indie folk band led by songwriter Ben Crum. The first edition of the group was assembled by Crum and Dan Donahue, two musically inclined friends who met in high school; they began writing songs together, with Donahue concentrating on lyrics and Crum contributing melodies. The two songwriters teamed up with multi-instrumentalist James Huggins, also a member of the group Of Montreal, to form the first edition of Great Lakes. After issuing a debut single on the Happy Birthday to Me label, the band's self-titled first album was released by Kindercore Records in 2000. As Huggins was busy with Of Montreal and a variety of other projects, he soon dropped out of Great Lakes, and the lineup became something of a revolving door, with Crum and Donahue overseeing the many players who performed with the group on-stage or in the studio. Crum and Donahue relocated to Brooklyn, New York and released the second Great Lakes album, The Distance Between, on Orange Twin in 2002. Diamond Times followed in 2006, but in 2009, Donahue opted to return to Athens, and Crum became the band's primary creative voice, writing both the music and words while fronting a group that had swelled to nine members. Ways of Escape, the first album from Great Lakes' Crum-led lineup, was released by Orange Twin in 2010. Crum began work on Great Lakes' next album in 2011, but the project was set aside for several years before he teamed with keyboardist Joe McGinty, vocalist Suzanne Nienaber, bassist David Lerner, and drummer Kevin Shea to complete the recordings. The album, Wild Vision, was released through the group's own Loose Trucks label in January 2016.