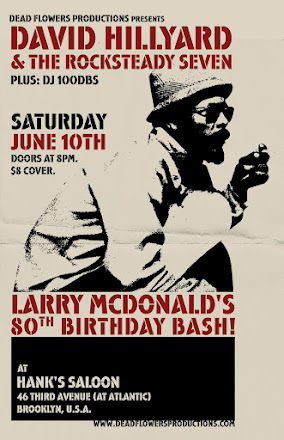 Yup, it's hard to believe, but Rocksteady 7's own Larry McDonald will be turning 80 this June! Larry has had a long and varied career so far with early gigs with Lennie Hibbert, then Carlos Malcolm's Afro Jamaicans, playing on a slew of classic reggae tracks in late '60s and early '70s, playing with Boris Gardiner Happening, then moving to the states and playing with Taj Mahal, Gil Scott-Heron, and most recently, Lee Scratch Perry. He has played percussion on literally thousands of tracks at this point! Larry is a founding member of the Rocksteady 7 and has been at the core of its sound. This will be a special concert for his birthday; expect special guest musician appearances and renditions of some classic tracks Larry has played on over the years!