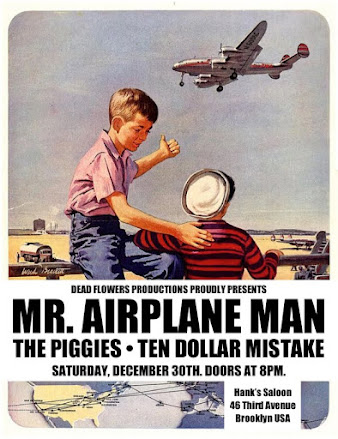 “The duo manages to make the now familiar line-up of guitar and drums sound urgent again, and they spit out both gritty, saturated blue-rock and airy, almost Spector-esque pop with a quiet strength.”

Mr. Airplane Man is Margaret on guitar and Tara on drums. Their sound is a mishmash of Mississippi hill country blues, Memphis weirdo rock'n'roll, drony VU and Stooges, and Boston garage-beat and pop wonderment. The band started in the late '90s. Almost immediately, they joined Morphine for a US tour and recorded a self-titled EP with Mark Sandman of Morphine. They went on to tour the US extensively, playing with The Reigning Sound, White Stripes, Detroit Cobras, Holly GoLightly, Hot Snakes, Yeah Yeah Yeahs, Blues Explosion, Dirtbombs and many more.

During the '90s and '00s, Mr. Airplane Man released three albums and an EP on Sympathy for the Record Industry. They successfully toured Europe and played two Peel Sessions on John Peel’s BBC radio show. Now Mr. Airplane Man is happy to be playing and recording again, after taking a break to have babies, live in the desert, and generally shake up their lives.