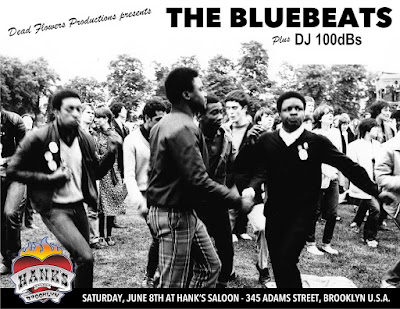 Formed by ex-Scofflaws singer Mike Drance in 1994, The Bluebeats recapture the sound of ska and rocksteady, creating a sound that is at the same time both classic and fresh. By combining strong vocals and rock-solid rhythms with original songs and Jamaican classics, The Bluebeats make fans whenever they perform. The band have appeared at Tramps, The Wetlands, and SOBs in New York City as well as performing at many tri-state area clubs and colleges. The band has appeared with such acts as The Skatalites, Culture, Desmond Dekker, Ken Boothe, Alton Ellis, Phyllis Dillon, Jimmy Cliff, Yellowman, Eek-A-Mouse, and Hopeton Lewis. A pinnacle moment for the group was when Roland Alphonso, a founding member of The Skatalites, joined the band on stage at The Cooler in New York City. In the spring of 1998, The Bluebeats toured Europe supporting a bill that featured Jamaican legends Dave Barker and Laurel Aitken. The band's first two albums Dance With Me and Live And Learn are available on all streaming/download providers. For 2019, Drance is joined by original member Steve Prisco, long-time band members Glen Hackett and Jason Hackett along with Al Speed and Vinny Carriero.