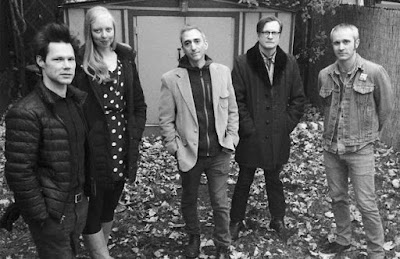 Great Lakes formed in 1996 in Athens, Georgia and released a self-titled debut in 2000. Though fronted by Ben Crum since its inception, the band has always enjoyed the contributions of a rotating cast of accomplished collaborators. Their debut benefitted from contributions by members of Neutral Milk Hotel, Olivia Tremor Control, Elf Power, of Montreal and many others, and garnered strong reviews from Mojo, Uncut, and many others, which led to festival appearances in Europe and a slot opening for Belle & Sebastian. After Crum left Athens for New York in 2002 the band went through several iterations, releasing three more albums and a handful of singles and touring the US a couple times and Europe many times. The list of collaborators grew to include a host of players who had made names for themselves with the likes of Talibam!, Ted Leo and the Pharmacists, Beirut, The Ladybug Transistor and many others. While their debut and 2002’s The Distance Between established Great Lakes' reputation as accomplished purveyors of top-notch late 60s-inspired psychedelic pop, over time the band’s sound shifted towards more organic and natural instrumentation, beginning with 2006’s Diamond Times and continuing with 2010’s Ways Of Escape, and increasingly incorporated more folk and country music influences as the songs veered away from the whimsical psychedelia of the band's early records and began to take on a greater degree of emotional depth. Great Lakes' more recent albums have been praised by Magnet, Allmusic, No Depression, and many others. A fifth LP is currently in the mixing stage, and is expected to see release in 2014. All of the band's albums are available from Orange Twin Records.