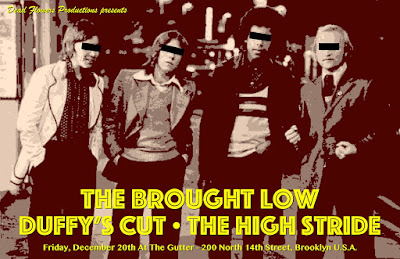 The Brought Low are an outer borough, boogie-rocking power trio the have been bringing the serious rock-action since 1999. This is their first area show in nearly a year.

Duffy's Cut Is a Philadelphia rock'n''roll band inspired by '60s British invasion and sweet soul music, with a tough bootboy edge. The band Is made up of ex-members of The Boils, Super Hi-Five, Bad Idea, Cranked Up! and Violent Society.

The High Stride, featuring folks you know from other boss NYC-area bands, play no bullshit maximum R&B. This is their debut show!

Friday, December 20th at The Gutter