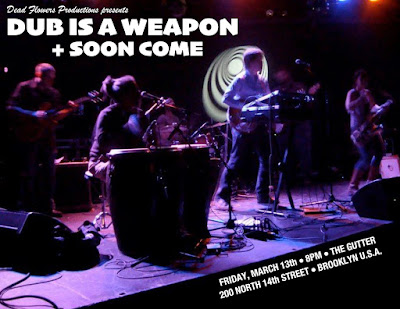 “A sprawling supergroup that combines the spacey atmospherics of dub with the brassy big-band soul of African pop.” - New York Magazine

“It can’t be done, man!” That’s what Dave Hahn (The Slackers, The Stubborn All-Stars, Antibalas), mastermind behind Dub Is A Weapon, heard when he first floated the idea of a live dub group, as he and his mates listened to some prime 1960s King Tubby cuts in the band van. “Everyone seemed to think you could only do dub in the studio,” Hahn recalls. Hahn set out to prove them wrong, with skills learned live and on the road, and with help from a Jamaican beatnik percussionist, an old high school friend, and young upstarts from the Brooklyn scene. Together they’ve honed their live take on the genre’s spaced-out grooves, a sound felt in full force on their Vaporized album and on stage.

Soon Come is a project focused on bringing foundation reggae riddims to life using almost entirely analog equipment. 100dBs mixes and dubs the music live, creating a platform for New York's most talented singers and deejays to flex their skills on the microphone.

Friday, March 13th at The Gutter

* Canceled due to the coronavirus outbreak and subsequent NYC shutdown.
Posted by Dead Flowers Productions