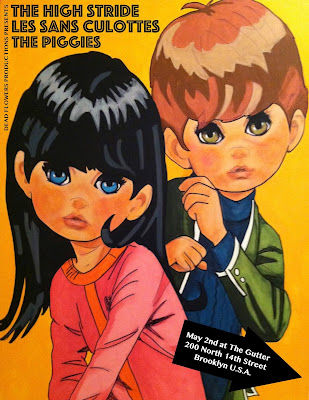 The High Stride — featuring folks you know from other boss NYC-area bands — play no bullshit, maximum R&B. This is the third show from Dead Flowers' favorite new local band. The Piggies are a bunch of NYC scene veterans who have kicked around in dozens of bands including the Little Killers, the Sea Monkeys, Wighat, Sato & Jonny, the Haney Brothers, the Poolside Cowboys, Holy Crow, the Underthings, the Dirt Cheap, and more that they don't remember (and neither do you). Posessing an extreme distaste for show-biz hustle and self-promotion, but a non-negotiable need to roll & rock, The Piggies can be found playing out in various NYC-area houses of ill repute on a regular basis, putting pretend rock'n'roll bands half their age to shame, and occasionally opening for touring acts like The Detroit Cobras, Barrence Whitfield & The Savages, The A-Bones, Mr. Airplane Man, and so forth. The "Francophonique Tsunami" "Those Frilly Parisian Underthings" and "Seven-headed beast from the hard-scrabble streets of Menilmontant," Les Sans Culottes borrowed their name from the ill-clad (i.e., long-trousered) citizen- soldiers of the French Revolution. The band's sound is a melange of Gainsbourg, NY Dolls, Blondie, the Shirelles, and the Kinks.

Saturday, May 2nd at The Gutter