"You seem to have actually come up with something new, not an easy feat these days." -James "The Hound" Marshall

The Lost Crusaders is the outgrowth of New York City garage-rocker, Michael Chandler's appreciation of Southern and urban gospel music and its often hard-edged message of hope and comfort in a turbulent world. Chandler's own musical history began in the early 1980s, with his country-western/folk/comedy duo, Tchang & Chandler at Club 57 on Manhattan's lower east side and with the seminal '60s garage rock band The Outta Place. Tchang & Chandler formed the basis for The Raunch Hands, a rhythm & blues, surf, punk powerhouse which has endured, recorded, and toured for over twenty years and boasts record releases and an ardent fanbase on four continents.

Throughout his musical career, Chandler wondered how to incorporate the great sounds of gospel music -- the very basis of all popular R&B -- into a form that could be appreciated by a secular audience without outright theft (a la Ray Charles), and while bypassing the trite sterility of today's "Christian contemporary" music. The answer was helped along by two things: the declining moral and environmental state of the world, and a show on Ludlow Street in New York City by Chandler's side-project, Chandler & The Chasers alongside Atlanta's Tiger! Tiger!, fronted by Buffi Aguero (SubSonics, Vendettas). The two found an instant collaborative affinity and set the wheels of The Lost Crusaders in motion. With Buffi in place as rhythm guitarist and long-distance motivator, Chandler enlisted the help of recently-transplanted St. Louis native, Brian McBride, the over-the-top bassist and co-frontman of the Queens-based band The Visitors (and current member of the Electric Shadows), to co-write and arrange the material for an LP. Brian's by-rote, fingerpicking style on bass meshes perfectly with the band's rhythm which was provided by the phenomenal drummer, Joey Valentine, formerly of the Star Spangles and, more recently, Brooklyn's Coydogs. With a top-notch rhythm section in place, Chandler and Buffi needed to add some flavor to the mix, and she suggested the talented lead guitarist, Johnny Vignault, with whom she had played in the Vendettas. Also originally from Atlanta, now a New Yorker, Johnny has played and toured with The Woggles and NYC's Brother Reverend. The next necessity was a piano/organ player, and Chandler figured Craigslist was as good a place as any to look; he received this sparse response: "Jerome here. I play keys and organ for Kelly Temple church of God in Christ in Harlem. Born and raised in Savannah, GA, I've been in church all my life and my father was/is my pastor. You know the rest!" Over dinner in Harlem, Chandler brought Jerome Jackson aboard without ever hearing him play.

It had always been Chandler's notion to share the musical spotlight in this project, and he spread around the the lead and back-up vocal duties to others, as well as inviting an array of very talented and established musician friends to participate in the recording of the Lost Crusaders' LP, now named, Have You Heard About The World? Brian sings lead on "Wasted On The Wind," and Buffi has featured backing vocals on "I Don't Ask Why" and "It Don't Worry Me," the latter being the song featured in the closing credits of Robert Altman's Nashville, and written by Keith Carradine. Jon Spencer (Pussy Galore, Blues Explosion, Heavy Trash) sings along with Chandler on "I Wonder What Ever Happened," and plays acoustic guitar on a few songs as well. On the two country numbers, country/folk heroine Laura Cantrell lends her plaintive voice, doing Emmylou Harris/Graham Parsons-style duets with Chandler. Also featured are Keith Streng of The Fleshtones, providing a killer lead guitar track on "There Used To Be A River," and Matt Verta Ray (Speedball Baby, Heavy Trash), on lap steel guitar. Former member of the Fleshtones and Andy G. & The Roller Kings, Steve Greenfield plays alto and baritone saxophone.

Finally, Chandler enlisted experienced producer, Dean Rispler (Little Killers, Candy Snatchers, Bad Wizard, among many others) for production duties, who brought the band to Alap Momin's Dead Verse studios in Union City, NJ. Alap (who is also a member of experimental hip hop group, dälek) engineered the sessions. When everybody converged, Have You Heard About The World? was recorded and mixed in ten days, and in spite of The Lost Crusaders' wealth of talent and experience, the band all feel that the whole is actually far greater than the sum of its parts.
Posted by Dead Flowers Productions

New vinyl from The Black Hollies 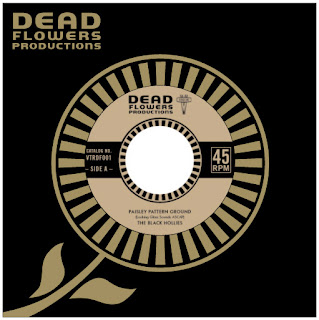 Dead Flowers is very proud to announce the launch of our new jukebox series, released in conjunction with our friends at Vibratone Records; the record's all sport boss company sleeves and exclusive tracks. The first 45 in the series is from The Black Hollies, featuring Casting Shadows album track "Paisley Pattern Ground," paired with the exclusive monster psych b-side "Hold Tight (Go Out Of Your Mind)" — the only recorded document of the NOW line-up of the group!!!

The 45 is available now via Vibratone's mail-order, from the band on tour (some in a special limited-edition sleeve!), or digitally here.

True love for the Nouvellas’ debut 45!

What do you get if you cross garage rock with funk and soul? This. Is it good? Is the Pope a Catholic? Don't ask me stupid questions. Nouvellas have been threatening to release this for several months now and the wait is finally over. Singers Jaime and Leah (formerly of The Dansettes) are both inveterate crate diggers well-versed in the dusty groove and thus have a very clear idea about what they are doing here. Basically that amounts to getting all raunchy over the band's dirty guitar noise on the a-side about what a guy needs to do to keep them, while on the b-side they get all slow and saucy about what they will do to keep a guy. If this seems a bit like having your cake and eating it don't complain. You want a copy of this.
RATING: 5/5