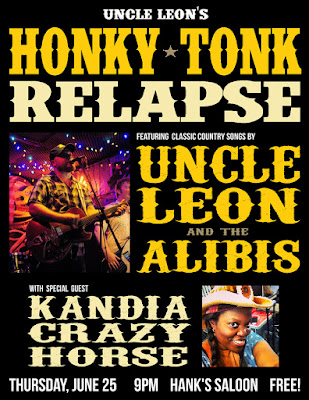 When you hear the words "classic country music", a few famous faces come to mind—all of them, most likely, white and male. But Kandia Crazy Horse is out to change all that. The NYC-based singer and songwriter is "on a crusade to become the first black woman to be invited to join the Grand Ole Opry."And the way she sings — with a style that's part deep-South traditional country, part soul, and more than a little influenced by the crossover twang-rock of '70s California — she just might pull it off.

Kandia's latest album, Stampede was voted the #2 Country Album of 2014 by The Village Voice. Folks above 110th Street know her as the founder and curator of the Harlem Honky Tonk musician series. Now, we're proud to bring her back out to Brooklyn, as part of Uncle Leon's Honky-Tonk Relapse, a live, monthly, booze-fueled celebration of classic country songs. (Or, as singer/organizer Leon Chase likes to put it: "A country music night for people who hate modern country music.")

The Honky-Tonk Relapse is, by definition, rooted in the past — the band Uncle Leon and the Alibis' repertoire of cover songs spans roughly from '40s Hank Williams to late-'70s Waylon Jennings. But they're proud to preface that party with a decidedly 21st-century act. Kandia Crazy Horse taps into the true legacy of "roots" music, reminding us that — despite what the marketing boys in Nashville might want us to believe — the face of traditional American music has never been just one color, nor was it born from just one sound. Like the best outlaws of her genre, she defies all expectations. And, perhaps most importantly, the woman writes a damn good song.