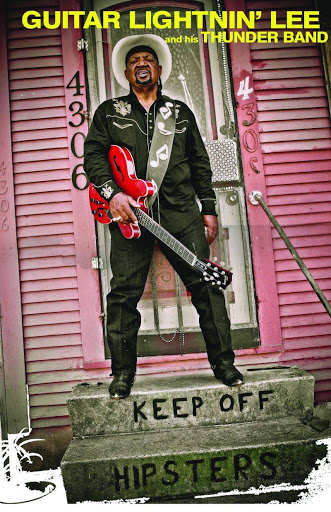 Guitar Lightnin' Lee, a multi-talented rhythm&blues purist, has defied all rational logic by assembling his band with a bunch of veteran rock'n'rollers half his age. His talent, lyrics, powerful voice, and boisterous personality match perfectly with his backup band. Thus, creating a supercharged blown out style of New Orleans rock'n'roll and blues. The youthful exuberance from all members, especially Lightnin’, keeps the music exciting and gives it the vibrancy it had in it’s heyday.

In 1997, Lightnin’ found a young drummer, Paul Artigues (Die Rotzz). They played together for years working on their sound. With the addition of slideman Ted Mathews and bassist Marvin Hirsch they formed the Thunder Band. Guitar Lightnin’ has released two 7-inch records on die Slaughterhaus Records and a self-released CD.