Runnin' Yo' Mouth On Me 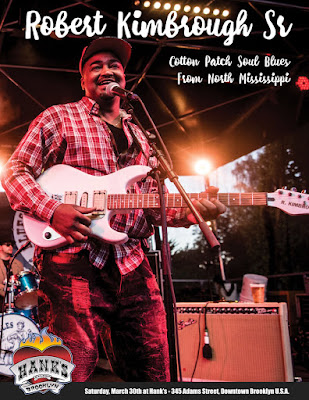 Robert Kimbrough Sr continues the Cotton Patch Soul Blues style created by his father, the legendary Junior Kimbrough. From an early age, Robert was steeped in the sounds and life of North Mississippi and its distinctive style of blues. Growing up, Robert listened, first-hand to Mississippi blues royalty that played with his father at home, at Junior’s Juke Joint Club, and the ever frequent weekend house party and porch jam session. The blues was simply part of everyday life as a Kimbrough. Robert continues his father’s musical tradition, along with some of his siblings. You can often find many of them sharing the stage on any given night in Mississippi. The Kimbrough name, along with the Burnside name, is part of a blues dynasty that remains strong today, bringing people from all over the world to see and hear them play.

The Cotton Patch Soul Blues style that Robert plays is a straight link to the music that his father originated in North Mississippi. It is a deep soul sound that can be linked back to his ancestors coming from the cotton fields, singing and ‘hollering‘ as they worked in the tall rows of Mississippi cotton. This distinct and somewhat underground style of blues is rooted in hypnotic, rhythms and dance-able grooves. The Black Keys released an entire album in 2006 of Junior Kimbrough cover songs called Chulahoma: The Songs of Junior Kimbrough. Up until the mid '80s, the only way to hear this music was to visit a church-turned-blues-den founded by Junior Kimbrough in Chulahoma, MS that unfortunately burned down in 2000.