Make Your Bed For Me 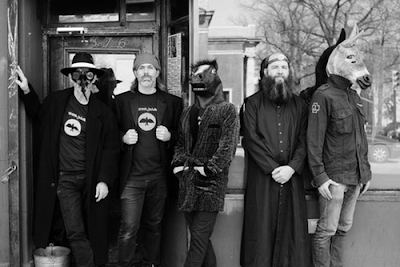 "Comprising most of the members of Greek rembetiko revivalists Que Vlo-Ve, [Greek Judas] reached the inevitable point where it made sense to completely and explosively electrify the colorful, gritty repertoire from the 1920s and 30s underground that they’ve mined up to this point. Wade Ripka alternated between roaring, poinpoint-precise, menacingly chromatic electric guitar leads and and searing lapsteel lines, joined by a masked rhythm guitarist who doubled on tenor sax on one of the later numbers. Slavic Soul Party drummer Chris Stromquist nimbly led the group through the songs’ relentlessly tricky changes with stomp and aplomb while bassist Nick Cudahy was the picture of cool, chilling in the back, delivering the same kind of effortless psychedelic groove that he did for so long in the late, great Chicha Libre. Toward the end of the set, frontman Quince Marcum picked up his horn and joined with the sax player for some intricate twin leads on what sounded like a brass band mashup of Macedonian folk and Led Zep." -New York Music Daily