A Different Kind Of Country 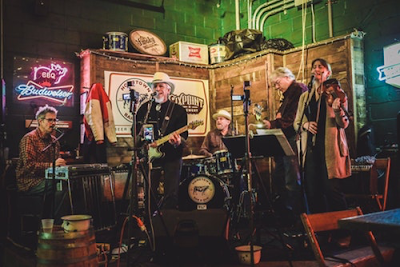 The Whiskey Bumps are an all-star band fronted by Alan Lee Becker, which blends rootsy original tunes with tasty covers they call the "Honky Tonk Circus!" Alan Lee Backer (singer/guitarist/songwriter), who also plays banjo, mandolin, dobro, lap steel, bass, six-string bass and harmonica, has been a working musician since age 16. Since 1989, he has gigged with many Americana/roots-rock performers in the New York area including a two-year stint as guitarist/mandolinist for Walter Egan (writer/singer of “Magnet and Steel” and the author of “Hearts On Fire,” recorded by the legendary Gram Parsons). As a founding member of the Twanglers, he helped kickstart the Americana/alt-country movement with his participation in the groundbreaking first Rig Rock CD compilation on Diesel Only Records. With his current band, Alan Lee & The Whiskey Bumps (and his former band, the Wicked Messengers) he has opened for Rosie Flores, Sara Evans, Bill Kirchen & Too Much Fun and Highway 101. He has also, (with the Twanglers) supported artists ranging from Junior Brown and Boozoo Chavis to the Beat Farmers.

Thursday, May 30th at Hank's