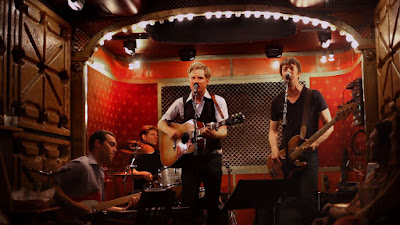 Marcellus Hall has recorded with the bands Railroad Jerk and White Hassle and has toured the US, Europe, and Japan. He continues to make music under his own name. A solo album, The First Line, was recorded with accompanying musicians and released on Glacial Pace Recordings in 2011. A second solo album, Afterglow, was recorded and released with The Hostages in 2013. Hall now records and performs with The Following Guests (Damon Smith, Mike Shapiro, and others), formerly known as The Hostages).

The ultimate in the burgeoning garage folk art rock literate dance acoustic idiom that is sweeping the city. Hall and his band deliver like no one else. No one even comes fucking close. There is a reason why all of New York is talking about New York’s best kept secret. If it’s great music you’re looking for, you’ve come to the right place. You won’t want to miss this!