The Beast is You 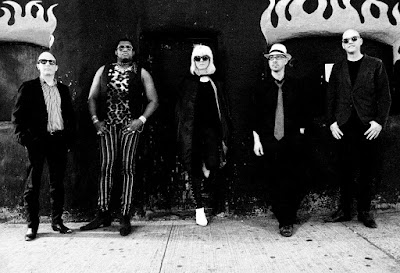 The Electric Mess are a garage-punk/psychedelic band from New York City, formed in 2007. They released their fourth album, The Beast is You in 2018, and have toured Europe, three times, as well as several cities in the States. Led by the dynamic and androgynous Esther Crow (also rhythm guitar and percussion), with Dan Crow (guitar), Oweinama Biu (keyboards, vocals), Derek Davidson (bass), and Alan J. Camlet (drums, vocals), "there has never been a more apt name for a band who encompasses such a massive range of influences...  a real kaleidoscope of sound, rapid fire lyrics, sheer unadulterated urgency, and a real rock and roll attitude." (Powerplay Magazine, UK) They plan to release their fifth album, later this year.

The Piggies are a bunch of NYC scene veterans who have kicked around in dozens of bands including the Little Killers, the Sea Monkeys, Wighat, Sato & Jonny, the Haney Brothers, the Poolside Cowboys, Holy Crow, the Underthings, the Dirt Cheap, and more that they don't remember (and neither do you). Posessing an extreme distaste for show-biz hustle and self-promotion, but a non-negotiable need to roll & rock, the Piggies can be found playing out in various NYC-area houses of ill repute on a regular basis, putting pretend rock'n'roll bands half their age to shame, and occasionally opening for touring acts like the Detroit Cobras, Barrence Whitfield & the Savages, the A-Bones, Mr. Airplane Man, and so forth. Their cover of the Rolling Stones' "Parachute Woman" was issued as part of Norton Records' Rolling Stones covers series, on the flip side of LaLa Brooks (of the Crystals) doing "Play With Fire."