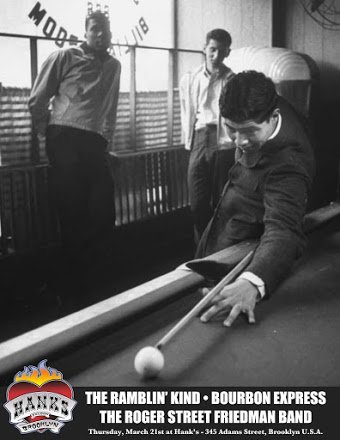 The Ramblin' Kind are a New York City country band with a penchant for old-school licks and iconoclastic ideas. Singer/guitarist Jim Allen, lead guitarist Matt Applebaum, bassist Paul Foglino, and drummer Steve Goulding serve up songs with tons of twang and lyrics that would get them tarred and feathered in Nashville.

Singer-songwriter Roger Street Freidman is 54, a husband and a father of two, and about to release his masterwork, Shoot The Moon. It’s a full-emotional spectrum collection of vivacious and reflective vignettes from real life that recalls the pop-rock singer-songwriter tradition of Jackson Browne, Marc Cohn, Randy Newman, Colin Hay, Bruce Hornsby, and Mark Knopfler. Few artists make albums like this today. In an age of irony, few songwriters are this brave in their vulnerability, and possess Friedman’s gift for penning hook-laden, emotionally resonant, pop-rock.