It Sure Feels Good! 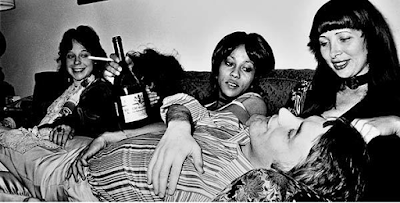 The Lord Calverts are an explosive garage rock/power pop quintet from the New York City. The band claims that their roots are in Baltimore, where, as part of the burgeoning '60s garage-rock scene, they recorded for obscure labels and occasionally got a song into the lower rungs of the local charts. Truth or myth, their music is clearly influenced by that era, but with a sound that is absolutely current. The Lord Calverts deliver true American roots rock: fast, nasty, catchy and rude.

The Piggies are a bunch of NYC scene veterans who have kicked around in dozens of bands including the Little Killers, the Sea Monkeys, Wighat, Sato & Jonny, the Haney Brothers, the Poolside Cowboys, Holy Crow, the Underthings, the Dirt Cheap, and more that they don't remember (and neither do you). Posessing an extreme distaste for show-biz hustle and self-promotion, but a non-negotiable need to roll & rock, the Piggies can be found playing out in various NYC-area houses of ill repute on a regular basis, putting pretend rock and roll bands half their age to shame, and occasionally opening for touring acts like the Detroit Cobras, Barrence Whitfield & the Savages, the A-Bones, Mr. Airplane Man, and so forth. Their cover of the Rolling Stones' "Parachute Woman" was issued on a 45 as part of Norton Records' Rolling Stones covers series, on the flip side of LaLa Brooks (of the Crystals) doing "Play With Fire."

Wire Troop melds the muscle of a 60s-style power trio with the finesse and stylistic breadth of '70s pub rockers. Playing a carefully curated and eclectic selection of second-hand blues, old time rock'n'roll, Tex-Mex, boogie, R&B instrumentals, and a little hard country, Wire Troop keeps it lean and tight and focused on delivering a good time.

Saturday, May 18th at Hank's