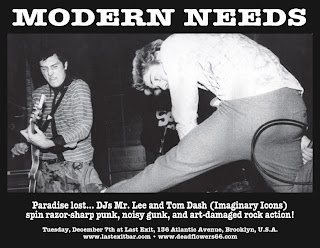 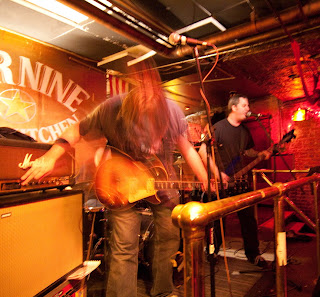 THE BROUGHT LOW
with PIGS and FRESH KILLS
Party to celebrate the vinyl release of The Brought Low's Third Record on Heavy Slab Records and the launch of the new label Coextinction Recordings... Bring yer earplugs!

When Giants Walked The Earth 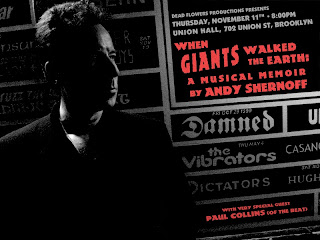 ANDY SHERNOFF of The Dictators
with PAUL COLLINS of The Beat & The Nerves
Andy Shernoff tells tales of the days when sex was safe and drugs were cool in his solo musical memoir, When Giants Walked The Earth. Andy weaves a narrative recalling intimate stories of growing up in New York City, the early days at CBGBs and touring the UK at the height of the punk-rock explosion in 1977 while performing his tunes that have been recorded by The Dictators, Joey Ramone, Dee Dee Ramone, Mary Weiss (Shangri La's) and Dion DiMucci.

In 1974 Paul Collins formed The Nerves, who proved to be one of the pioneers of the burgeoning U.S. punk-rock scene, independently releasing their own EP (which included the classic "Hanging on the Telephone"). After The Nerves disbanded in 1977, Collins moved to LA and formed The Beat who toured with The Police, The Jam, and Joe Jackson; and released many acclaimed power-pop albums.