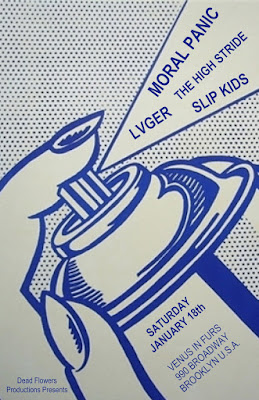 "Where has all the punk rock gone? Well, if you’re seeking more than the typical mutual admiration society jerk-off that has become punk these days, look no further. Brooklyn’s Moral Panic don’t adhere to stylistic cues, don’t pander to their audience, and they don’t care what you think of them. What they do is play with lightning speed, balance 'tight' and 'loose' like the best of any Killed By Death band, and do it better than your friend’s boring hardcore outfit that played five times in the past month. What do they sound like? Cleveland’s Pagans at 45. There’s no posturing, no begging you to think they’re cool, no BS." -The Big Takeover

Featuring both ex- and current members of the The Templars, 45 Adapters and many others, Lvger play tough street-rock'n'roll (think Motörhead meets the punkier side of NWOBHM).

Slip Kids is a powerhouse tribute to The Who featuring members of The Brought Low, Bad Wizard, and Hopewell.